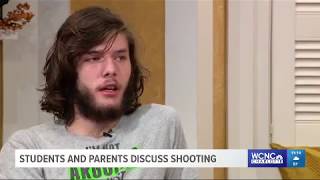 Following the deadly shooting at Butler High School in Matthews on Monday, I sat down with a senior and a freshman. One had class with the shooting suspect; the other had class with the victim. "Right now, this appears to be a tragedy that was the result of conflict between two individuals and an isolated event. First reports indicate that the conflict began with bullying that escalated out of control and as fear took over, a young person brought a gun to solve the problems.

Fall in the Carolinas

We've had so much fun exploring our area during the fall season! This is my favorite time of year! I've been dying to go apple picking since we moved here. With a three-month-old, we headed to the closest apple orchard: Windy Hill Orchard & Cider Mill. Of course, we arrived the first weekend they stopped doing pick your own apples on Saturdays. However, you can still pick your own apples on Fridays 1-6 p.m. Click here for more information on pick your own apples. Blair obviou
2345
6